Eliana Aubin, President of the local Sierra County Humane Society, lives by this creed. She and a small group of volunteers founded an independent Humane Society in 1989. Five years ago, despite initial opposition from ranchers and local town officials, Eliana opened Desert Haven Animal Refuge, the only no-kill animal refuge in this corner of New Mexico. She has never taken a salary and has worked tirelessly with volunteers to maintain a thrift shop, "Paws & Claws", that provides most of the funding for Desert Haven. A small adjacent RV park provides income and a free site for workampers who volunteer at the refuge. 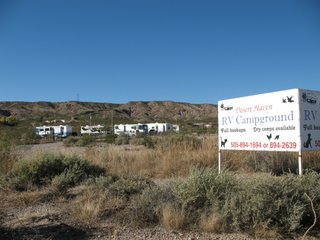 There are currently a couple of sites available in December for volunteers. Come by for an hour, a day, a week or a month. Dog-walkers and kitty cuddlers are always appreciated! Paying RV customers are welcome to visit and help care for the animals if they wish but are under no pressure nor obligation to do so. All proceeds from the RV park go to benefit the animal residents of Desert Haven. Call or e-mail first to make sure a site is available. Click here for more details, photos, and contact info.


Behind the campground lies the gate to the sanctuary. The design of the refuge is Old West - rustic yet functional. 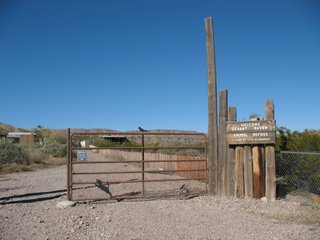 Except during meals and excercise runs when the dogs bark excitedly, the refuge is quiet and peaceful. The only sound is the cooing of the doves, who were the very first residents at Desert Haven. Birdland now also accomodates four peacocks, two ducks, and believe it or not, chickens. The chickens are here because New Mexico is the only state that has no law against cock fighting, a brutal blood "sport." This is Birdland.
> 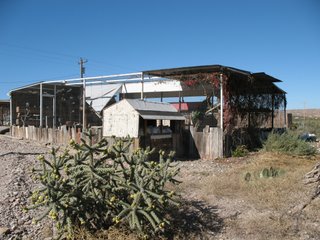 Rainbow Bridge pet cemetery is open to the public for pet burials. The one-acre fenced in area does double-duty twice a day as a place where the dozen or residents of Dogtown, shown below, can run off-leash. 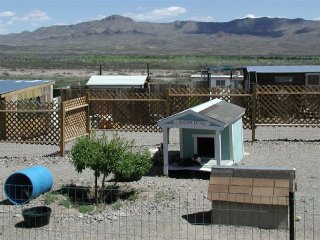 Two views of Rainbow Bridge show the cemetery as a place of reflection, with park benches, statuary, and wind chimes. 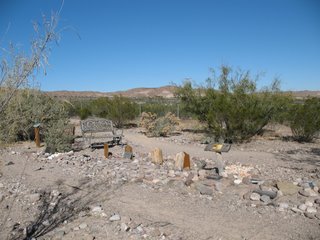 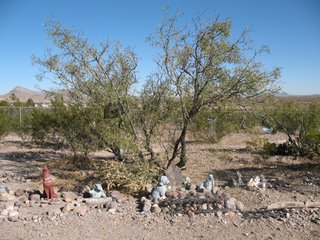 With Dogtown on the right, here is a view of the Caballo Mountains to the east of Desert Haven. 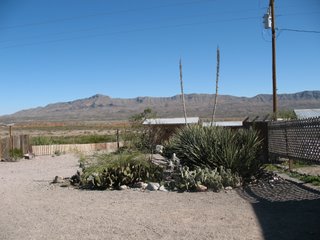 Behind Dogtown lies the Cool Cat Neighborhood, over 1200 square feet of what has been described as "the feline equivalent of a five-star hotel." 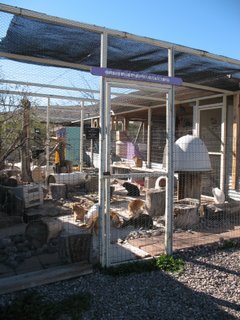 Approximately two dozen cats can be accomodated. Volunteers put out seven or eight plates of dry and canned food each morning, which makes them very popular with the kitties! Self-feeders and waterers and numerous litter boxes are placed strategically to be always available. The desert floor of the Cool Cat Neighborhood, being sand and gravel, is just too tempting to avoid becoming one giant litter box. To prevent this, most of the area has been tiled or rocked over. Ed and I spent a few hours helping to complete this project. The cats were very interested in the new rocks being brought inside and immediately commenced "nasal inspections". 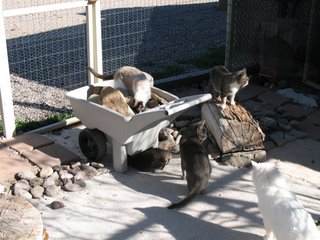 This is Pam, one of the RV workamping volunteers, with two of the most loving cats here at the Refuge. Both Feather, in white, and Toesie, orange and white, are "top cats" in the hierarchy. They usually eat first and have a tendency to "glom" onto you and will be petted for as long as you are willing. They might stop purring long enough to take a gentle swipe at other cats who try to usurp your attention. 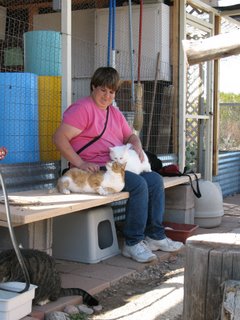 Can you see how Toesie got his name? He has six toes on each front paw. 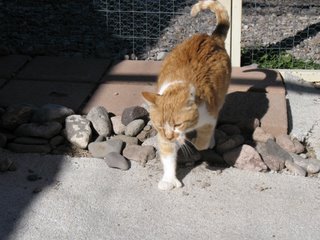 Feather supposedly has a feather-shaped mark on his head, but I never could really see it. 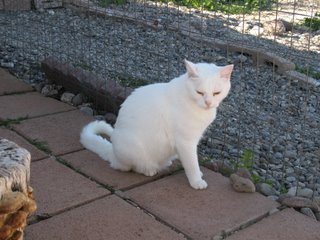 This is Ernie, a buff-colored very young guy, who is a "pre-purred putty-tat." He followed me everywhere, loudly purring just in anticipation of being petted. If we didn't live in a motorhome with two dogs and a cat already, I would have adopted this guy. He's great. But I don't think it would be fair to Bonnie, "Queen of Sheba" as the only cat in our household for three years now. Besides, we're out of room on the bed already! 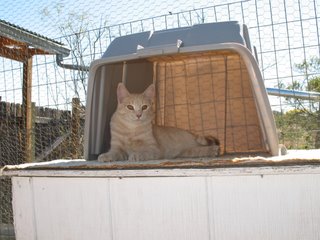 A close-runner up as my favorite is Choco, this mostly-Siamese girl with gorgeous blue eyes. She, too, is extremely affectionate. She looks so much like Bonnie! 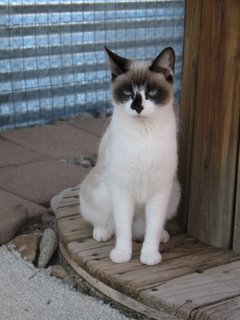 This black and white girl named Sasha really needs a home of her own. Read her story here on the petfinderwebsite She is a bit timid and the other cats take advantage of her so she has to eat last, etc. But she is a sweetheart and would love to be cuddled by someone she trusts. 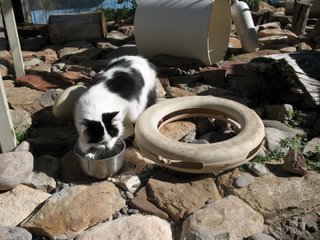 Finally, these last two guys are brothers whose owner passed away. Tudor, the long-haired white guy, is very gentle and sweet. 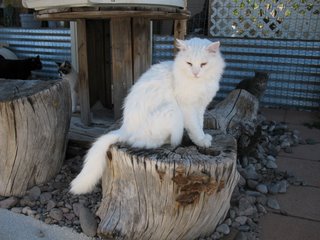 And who could resist Cooper, this happy tabby caught in the act of rolling back and forth in the sunshine! 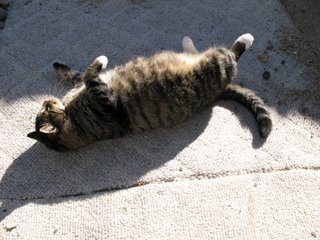 Desert Haven needs your support. Please check the new blog that I have set up for them at http://deserthavenanimalrefuge.blogspot.com/

There are links to both their web sites with lots more information that I can share here. Eliana writes a weekly newspaper column called "Humane Happenings" with news, updates, and a "wish list" for Desert Haven. This column will be posted in the blog from now on. So please, bookmark the site or add it to your favorites. Any donation of cash, no matter how small, is greatly apprecated. If you can visit Truth or Consequences, New Mexico, stop by and if you have room in your heart for a new dog or cat, you will allow Eliana to help one more.

The Starfish Story - Cat Rescuers' Version
(Traditional. There are innumerable versions of L Eiseley's "The Star Thrower"on the web set on beaches all over the world. This cat lovers' version was found in a cat shelter newsletter 1993 and on Usenet and is about "making a bigger difference".)

A traveller was walking along a beach when he saw a woman scooping up starfish off the sand and tossing them into the waves. Curious, he asked her what she was doing. The woman replied "When the tide goes out it leaves these starfish stranded on the beach. They will dry up and die before the tide comes back in, so I am throwing them back into the sea where they can live."

The traveller then asked her "But this beach is miles long and there are hundreds of stranded starfish, many will die before you reach them - do you really think throwing back a few starfish is really going to make a difference?"

The woman picked up a starfish and looked at it, then she threw it into the waves. "It makes a difference to this one" she said.

Considering this, the traveller continued his walk along the beach. After a while he arrived at a place where a river ran into the sea and he turned back inland, walking alongside the river. He was still pondering the words of the starfish woman when he noticed a group of people wading about in the river trying to catch floating objects and throwing them safely onto the river bank. When he got closer he saw that the people were rescuing kitties which were struggling in the water and floating downstream towards the sea. Though many of the kitties were thrown to safety, many others were washed out to sea, never to be seen again.

The traveller thought about this and thought about what starfish-woman had told him. He knew that it made a difference to every kitty saved. He also knew that he could not stop the sea from washing up starfish, but he knew that there was a way to make a bigger difference to all the kitties being washed away in the river so he called out to the people who were fishing out kitties. "Why don't some of you go upstream and stop people tossing them into the river in the first place?".

This is a very true story. I have a few animals but I feel bad I can't save anymore than I have. While reading this story I realized you may not be able to make a difference in all the animals lives but the few you have will be saved.